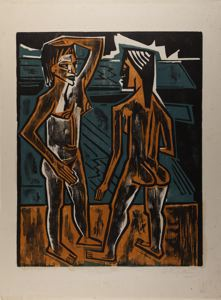 
Object Type: Works on Paper
Creation Place: Europe, Germany
Medium and Support: Color woodcut print on paper
Credit Line: Museum Purchase, Susan L. Mills Fund
Accession Number: 1959.10
Max Pechstein was a leading member of the German Expressionist group, Die BrÃ¼cke (The Bridge) and is known for his nudes and landscape paintings. Die BrÃ¼cke was founded in 1905 by a group of German artists including Erich Heckel and Ernst Ludwig Kirchner, whose work is also on view in this exhibition. Their manifesto called for producing work that broke with traditional rules of creating art, instead adopting the late nineteenth century influences of Impressionism and Post-Impressionism. Many of the prints by this group, including landscapes, portraitures, human figures, were simplified but impactful, created with bold outlines and vivid hues, as seen in this piece.

Pechstein traveled to Palau, Western Pacific, in 1914, where he started to work in a Primitivist style, which was influenced by a Western understanding of Indigenous cultures and was of major interest among German Expressionists. In Two Nudes, the shape of the body is boldly stylized and the contrast of bold orange and blue creates an exoticized impression. The texture of the wood shown in the print also enhances the primeval quality of this piece.

Your current search criteria is: Objects is "Two Nudes".