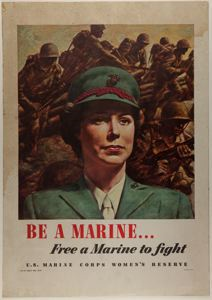 
Object Type: Works on Paper
Creation Place: North America, United States
Medium and Support: Lithograph on paper
Accession Number: 1943.73
World War II was a complicated time for women and their societal standing, as this poster demonstrates. With record numbers of women entering the workforce, the notion that womenâs labor should be strictly confined to the home was challenged. Women were not only now allowed to work outside the home, they were recruited with propaganda posters like this one.

The complexity of this piece is highlighted with the main phrase âBe A Marineâ¦Free a Marine to fight.â It was very new to the times that women were allowed to serve in the military, and now they had their own division. The contribution from the women in the Marines is immense and they worked in a variety of positions, from the unsurprising stereotypical cook all the way to jobs like aerial gunnery instructors and cryptographers. While this was an advancement for women at the time, the gender roles were still very much in place, as the poster reminds us with the slogan that still places women in a role meant to serve men. The woman on the poster is clearly separated from the men in the background and the implication is that if a woman were to take up some non-combat positions, more men would be available to go to the front. In this case, womenâs labor outside the home is expressly what the poster is asking for, yet it is still not free from gender norms and restrictions.

Your current search criteria is: Objects is "Be A Marine (U.S. Marine Corps Women's Reserve) (Poster)".