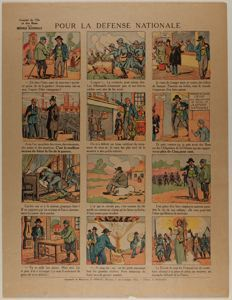 
Object Type: Works on Paper
Creation Place: Europe, France
Medium and Support: Color lithograph on paper
Credit Line: Gift of Mrs. June Richardson Lucas
Accession Number: 1942.166
This poster illustrates the ways in which citizens from all social classes of the French nation could show their patriotism during World War I by purchasing bonds issued by the Ministry of Finance. These bonds were issued to raise funds to support the troops fighting on the Western Front during the Great War (La Grande Guerre). The format of this poster uses color illustrations with captions to convey this theme.