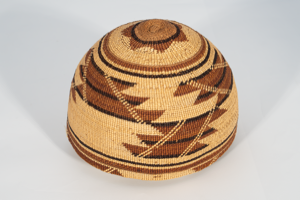 Technique: Twined basket. Spotty overlay on the interior, hard to say if they were going for full or half-twist overlay, probably half. It is dominantly a bear grass overlay cap with woodwardia and maidenhair accents in the flint design. Itâs my understanding that it is more unusual to âredâ used in a âyellowâ cap.

Design: Looks like a Karuk variation of the flint design as described by Kroeber on page 126-130. There are lifelines present and 3 design elements in sets of 2 (6 total).

Structure: This cap has a lot in common with 2005.134. The button is not as flat on this cap, but it is still a very good weave that is very strong with a nice overlay technique. The edging is really clean and well-trimmed. The interior is a bit rougher with some spotty overlay peeking through, could indicate a less experienced hand. No visible hairs on this one. There is some string in two spots on the rim (see photos) which could indicate it was hung or displayed here.