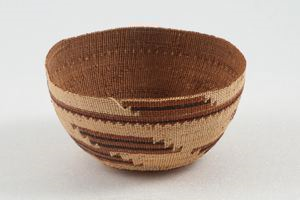 Technique: Twined basket. Not much overlay on the interior, hard to say if they were going for full or half-twist overlay, probably half. Mostly bear grass overlay background with some woodwardia for the flint design and maidenhair accents. Itâs my understanding that it is more unusual to âredâ used in a âyellowâ cap.

Design: Looks like it matches what Kroeber calls the tataâktak design from the Karuk on page 128-130, which he says corresponds to the Yurok sharp tooth design. I have also seen this variation called a grizzly paw in other sources. There are 3 flint/grizzly paw patterns. There are lifelines/division lines, though not prominently raised so less likely to be Karuk.

Structure: It is well finished and very smooth on the inside with nice trimmed edging. This is another one of those caps that might be considered a little âoffâ or was put up for sale, potentially like the other two in this accession. No visible hairs on this one.