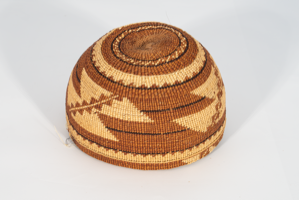 Technique: Twined basket. This is also a âred hatâ of predominantly woodwardia overlay, with some overlay visible on the inside making it a full twist overlay.

Design: 3 elaborate flint designs in bear grass overlay on the woodwardia background and stripes of maidenhair fern. Looks like the flint (in Yurok VEniigemaa) and snake design on page 126-130 of Kroeber. The lifelines are very pronounced, with a stick woven in which makes me think it is probably Karuk because thatâs one of their indicators plus the âred hatsâ being more likely Karuk. There are no hairs on this cap that I could see.

Structure: The weave is super strong, and the cap is beautiful, incorporating many materials and a bold design, definitely made by an experienced weaver. There is 1 big hair visible, stuck in the top of the hat on the outside

Cultural affiliation notes: A classic Hupa, Yurok, and/or Karuk ceremonial cap, most likely Karuk. Like 2005.131, this cap has all the hallmarks of a ceremonial cap, but it is so much smaller than some of the others, likely made for trade or sale in 20th century. The ones that were too small to wear were often for sale (itâs also quicker to make it smaller).