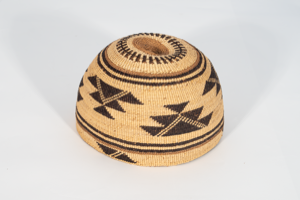 Design: Looks like the waxâpoo design on page 119-120 of Kroeber, a variation he describes as a distortion of the classic design elements; but it matches more closely what Kroeber calls the tataâktak design from the Karuk on page 128-130, which he says corresponds to the Yurok sharp tooth design. There are 6 designs around the side, more common to see odd numbers for most designs. Lifeline divisions are present, and the design conventions fit the expectation.

Structure: It is a really nice and tight weave, a very skilled and experienced weaver. No visible hairs in this one.

Cultural affiliation notes: A classic Hupa, Yurok, and/or Karuk ceremonial cap. This cap has all the hallmarks of a ceremonial cap, but it is so much smaller than some of the others, likely made for trade or sale in 20th century. The ones that were too small to wear were often for sale (itâs also quicker to make it smaller).