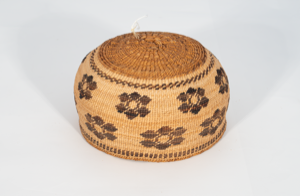 
Object Type: Baskets
Creation Place: North America, United States, NE California, Oregon border
Medium and Support: Possibly Tule warp and Conifer root weft. Bear grass and fern for the overlay.
Credit Line: Gift of Laurette Schorcht in honor of Doris Dennison, Music Director, Dance Dept. 1939-1972
Accession Number: 2005.130
Size: 6 in diameter, so it is a little small to be worn, but Iâm fairly certain it is not a bowl based on the very rough interior and the similarities to other hats.

Technique: Twined basket. Full twist overlay. Overlay is fully visible on the interior and the interior is much rougher than on many other hats. Likely conifer root base weft with bear grass overlay. The darker overlay material is the style of maidenhair fern but itâs not shiny enough. It is likely another fern or a dyed root.

Design: The design is so different and more contemporary, there are 16 flowers.

Structure: Itâs much more flexible and less strong than the Hupa, Yurok, and Karuk hats, more likely the inland style of using a tule warp rather than hazel or willow which would give a lot more flex. There are lots of hairs stuck in this cap. There is a very flat top, and it is more of an inland shape for caps. The button/start is very different here which makes me think itâs not Karuk like the record stated. It has more in common in terms of weaving style with hats like 1948.36 and 1969.87 which appear to be more inland. It has the same edging as those other hats too, the woven edge instead of the clipped edge.

Cultural affiliation notes: This does not look Hupa, Yurok, Karuk, though there are similar design and material conventions. The start/center/button is too different, itâs quite a bit deeper than expected for their hats, the black overlay material is also different, and the edge finishing is different. The weave is rougher too, not as fine. I think itâs likely from a nearby but more inland community like Klamath/Modoc, Astarawi, etc.