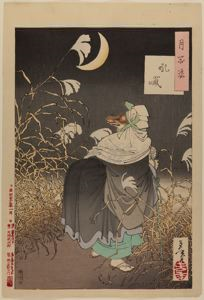 
Object Type: Works on Paper
Creation Place: Asia, Japan
Medium and Support: Color woodcut on paper
Credit Line: Gift of William P. Wentworth
Accession Number: 1986.1.73
Part of the One Hundred Aspects of the Moon series, this Yoshitoshi print depicts a scene from a well-known kyogen, short interludes in a Noh play. A fox, in order to convince a hunter not to kill foxes, trans-forms himself into the hunterâs uncle, the priest Hakuzosu, warning the hunter of the evils that await murderers of sentient beings. The hunter, suspicious of the fox, sets a trap after the disguised fox leaves. The scent of the trap is so strong that the fox reverts to his original form and falls into the lure of the trap and is captured. The scene depicted in this print is the moment at which the fox starts reverting back to his original form from his priestly disguise at the smell of the trap.

Characteristic of Yoshitoshi, and Japanese art in general from this period, there is no strong sense of ground. The grey of the assumed foreground blends nearly seamlessly into the dark background of the sky, the only real indicator of spatial tangibility and orientation coming from the reedy grasses framing the foxâs path and the crescent moon giving a sense of lighting or spotlight to the unfolding scene.

Your current search criteria is: Objects is "100 Aspects of the Moon, Konkai (The Fox's Cry) ; Hakuzo-shu ".