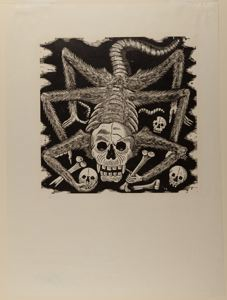 
Object Type: Works on Paper
Creation Place: North America, Mexico
Medium and Support: Zincograph (engraving on zinc) on paper
Credit Line: Museum Purchase, Susan L. Mills Fund
Accession Number: 1955.1
Although it is estimated that Posada produced roughly 20,000 images in his lifetime, he was a multi-disciplinary artist who remained highly unrecognized until his death in 1913. In the 1920âs muralist Jean Charlot described Posada's work as âprintmaking for the Mexican people.â After this statement was made his work gained much recognition and was printed in papers as representations of Dia De Los Muertos (Day of the Dead). His work conveyed political and cultural critiquesâspecifically, in this piece the spider is a symbol of Mexican dictator Victoriano Huerta. He was known to Mexico as a counter-revolutionist and was overthrown shortly after getting his seat in power. Posada tended to represent people he thought of as evil in his work in hopes to bring more awareness to social and political issues with his art.

Your current search criteria is: Objects is "Huerta as a Spider".