Bust of a Nude Man with Open Mouth 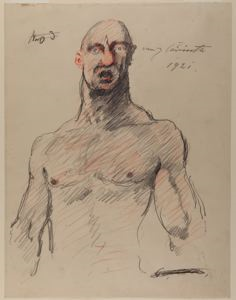 Bust of a Nude Man with Open Mouth


Object Type: Works on Paper
Creation Place: North America, United States
Medium and Support: Pencil and colored crayon on paper
Credit Line: Gift of Mr. Theodore Corinth
Accession Number: 1954.101
Bust of a Nude Man with Mouth Open illustrates the industrialized man. The enlarged trapezius muscles and athletic torso paired with an emotionally distraught face shows a man who is experiencing the kind of emotional violence that was fundamental to early twentieth century European society. Some formal characteristics are visually similar to the heroic warriors of Greek and Roman antiquity, alluding to the history of Europeâs military power. But there is more to this figure than a historic nod to antiquity. There is an added element of grittiness, perhaps as a reflection of an imperfect society. At first glance, the man looks aggressive and hostile, but after further contemplation, his expression seems to soften and he becomes more of an observer. There are subtle hints of concern and anguish that line his face, once again insinuating that the modern world may not be as commendable as one might initially think.

Your current search criteria is: Objects is "Bust of a Nude Man with Open Mouth".