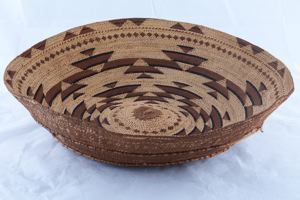 Design: Itâs a waxâpoo or friendship design just like many of the hats, some of the same markers of the hat design with the medallion in the center and somewhat of a three-section division. Looks like a waxâpoo variation, similar to one on page 119-120 of Kroeber, also called apxankoâikoi design by the Karuk that corresponds to the waxâpoo of the Yurok.

Structure: Iâm so curious about these trays, itâs like an inverted hat in some ways with the design. It holds its tray/bowl shape with the rods woven around the exterior. There are 6 of these rods all the way from the center of the very bottom to halfway up the sides. What is interesting here is that the bottom/protected support rods are all still attached with the original plant fibers and the top ones that would have had a lot more wear all have some repairs using string to hold them on. These are definitely more recent. There also is not a ton of wear or use on the interior but the string repairs indicate some wear and use over time. I read in a blog from the Clarke Museum in Eureka that it can be hard to tell the gambling trays and flour preparation trays apart because they were similar in shape, size, style - but due to the heavy overlay materials and lake of residue, Iâd say gambling fits more for this one. Virginia Fields also notes that gambling trays are deeper than other trays and more commonly use maidenhair fern as overlay.

Cultural affiliation notes: The record states, âHupa gambling trayâ and that seems accurate. Very much matches Hupa styles but Iâd be curious how the donor came to know it was Hupa instead of Yurok or Karuk, perhaps they knew a little more about where they acquired it.