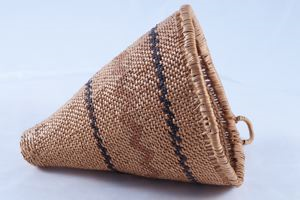 
Object Type: Baskets
Creation Place: North America, United States, California
Medium and Support: Hazel or willow warp shoots; bear grass or willow and fern weft; possibly alder bark dye
Credit Line: Gift of Laurette Schorcht in honor of Doris Dennison, Music Director, Dance Dept. 1939-1972
Accession Number: 1997.14.17
Technique: Twined basket. This actually isnât using the overlay technique for decoration; the overlay materials are used as a weft instead of having a conifer root weft base. Because of that itâs a looser weave, a little more open and less watertight but thatâs alright if itâs just decorative. Also, worth a note that the âredâ isnât actually woodwardia fern (as would be typical) - itâs the same regular weft material (willow, but maybe bear grass) but just dyed a little darker with alder bark maybe. Itâs like a shortcut to introduce a new color but not a new weaving element.

Design: Very simple design, the twining style is very interesting though, it inverts the zig zag band on the interior to add a little complexity to the design.

Structure: This is a miniature for certain, probably a model made for display based on the prominent hook. It is what is typically called a burden basket for gathering. Can also call it a gathering basket or a conical basket. This small basket is very sturdy and strong, holds it shape well. The loop at the top rim is still very intact. There are little to no use or wear marks