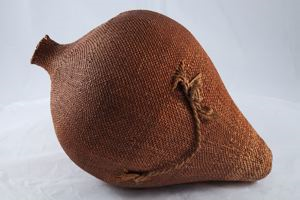 This Native American Paiute twined water jug brings attention to societal challenges in relation to water and who has access to water. This plant fiber basket was created for storing and carrying water by the Paiute Tribe, who inhabited areas of the Western United States during the 19th century. The Paiute have had one of the longest water rights battles in the history of the United States, starting when settlers took over the Paiute irrigation systems while the tribe was returning from war.

A current issue that echoes the history of the Paiute people and the history of water rights in the United States is the North Dakota Pipeline. The proposed pipeline would transport crude oil from North Dakota to Illinois. One of the many concerns surrounding the pipeline if it is implemented is endangerment of safe drinking water for the Standing Rock Sioux Nation and surrounding area. The controversy surrounding the North Dakota Pipeline highlights many issues around how governments manage resources, such as water, and who is given priority for access to those resources.