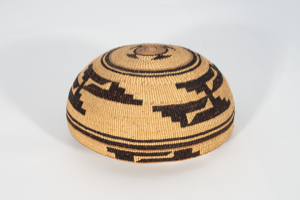 Technique: Twined basket. Half-twist overlay, no overlay shows through to the interior. The overlay is all bear grass (beige) and maidenhair fern (black), perfectly done, the maidenhair is shiny and in great condition.

Design: Itâs a flint design and itâs more stepped on the edge. This cap has the tataâktak design from the Karuk as described by Kroeber on page 128-130, which he says corresponds to the Yurok sharp tooth design. The design in the center of the shape looks like one of the waxâpoo designs on page 119-120 of Kroeber, a variation he describes as a distortion of the classic design elements. It very much fits design conventions in the 3 sections with an odd number (3) flint design. âLifelines,â the division lines at the rim and top, are visible but not as raised with a stick like you might see more commonly in Karuk caps.

Structure: I donât see any hairs in this cap. This cap shows a real mastery from the weaver, very experienced hand. The cap is really stunning, the interior is perfectly finished, and it is a strong weave with just the right shape. The weave is tight and strong. Edges are just clipped warp shoots.