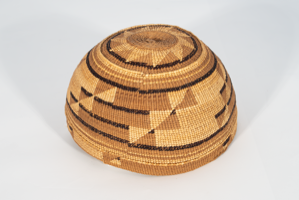 Technique: Twined basket. Spotty overlay on the interior, hard to say if they were going for full or half-twist overlay, probably half. The overlay is dominantly woodwardia dyed with alder bark with bear grass overlay for the bold design and stripes of maidenhair (stripes are a design element more commonly seen on âred hatsâ of predominantly woodwardia overlay). The interior is very smooth and well cleaned with minimal overlay showing through to the interior.

Design: Looks like the Yurok ladder (vilqemvilqemaa) design on page 121-122. The step like effect gives it its name. Ladders with notches like these were used to descend into houses, cut from logs. Itâs called the cut wood design for the Karuk and Lenoulon for the Hupa. This would be considered a âred hatâ meaning its more likely Karuk, also because it has very prominently raised lifelines (using a stick woven in) and a very flat top.

Structure: Same size as 1981.10.2 and very similar, could it be the same maker? Would be good to relate these. This is also a stunning weave, very strong and tight with great overlay technique and use of all the materials There is lots of string on the rim (see photos), which could indicate how it was hung for display. If itâs circa 1900 it couldâve definitely been worn, and I see one tiny grey hair stuck on the inside.

Cultural affiliation notes: A classic Hupa, Yurok, and/or Karuk ceremonial cap, most likely Karuk due to the overlay color and raised lifelines, those are Karuk signatures. Label says, âsquaw cap c. 1900 with a $350 value.â Iâve recommended not using the word squaw going forward. But the price is interesting, because that would be a big price circa 1900. That is definitely the price hats were selling for in the mid 20th century. Would be curious to see why this one was more expensive than 1981.10.2, perhaps the bolder design or the overlay materials.