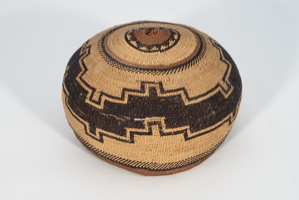 Design: Looks like some of the Hupa patterns described in Kroeber p. 134-138 which he describes as a Lenoulon, corresponding to the Yurok elk and ladder design, or the Karuk cut- wood designs. This design does seem to be way more common in Hupa though. The name means something like joined or tied together and is used because this pattern is continuous around the basket, not broken up into odd numbered elements. Does have the division into three sections but not raised division lines so it is likely Hupa or Yurok. The design is lovely.

Structure: This hat has pretty severe damage at the button and on the side, which allows you to see that incredibly thin willow or hazel shoot were used to weave it and the overlay is super fine. The thin warp may have led to it being easier to damage. No hairs visible in this one. It also kind of tucks in on the edge so it would sit right on the forehead but would have to fit a small head.