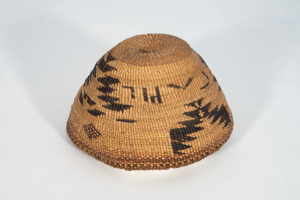 
Object Type: Baskets
Creation Place: North America, United States, NE California, Oregon border
Medium and Support: Possibly Tule warp and Conifer root weft. Bear grass and fern for the overlay.
Credit Line: Found in Collection
Accession Number: 1969.87
Technique: Twined basket. Full twist overlay. Overlay is fully visible on the interior and the interior is much rougher than on many other hats. Likely conifer root base weft with bear grass overlay. The darker overlay material is the style of maidenhair fern but itâs not shiny enough. It is likely another fern or a dyed root.

Design: I havenât really seen anything like this design, is it a different alphabet, initials like for an owner or a family or a commission?

Structure: Same shape and structure as 1945.145, which has hairs, so I am almost certain this is a cap and not a bowl. It also has the same edge finishing as 1948.36 where the edge is woven shut and not just clipped warp sticks. Didnât find any visible hairs. It has a lot of warping which could indicate a few things, such as a less sturdy material for weaving, less experienced weaver, a lot of use, or a lot of exposure to water causing the materials to warp and expand.

Cultural affiliation notes: This does not look Hupa, Yurok, Karuk, though there are similar design and material conventions. The start/center/button is too different, itâs quite a bit deeper than expected for their hats. The black overlay material is also different, and the edge finishing is different. The weave is rougher too, not as fine. Also doesnât have the three sections or design conventions of the more coastal caps. Itâs likely from a nearby but more inland community like Klamath/Modoc, Astarawi, etc.