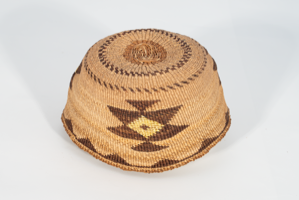 Technique: Twined basket. Full twist overlay. Overlay is fully visible on the interior and the interior is much rougher than on many other hats. Likely conifer root base weft with bear grass and dyed porcupine quill overlay. The quill is the bright yellow portion in the center of the design. Quill is one of the hardest materials to work with for caps, so these would have been especially prized and required additional skill.

Design: Whatâs so distinct here is the yellow, itâs porcupine quill dyed with a lichen/moss, itâs easier to tell from the inside because you can tell the quills are hollow. The design is also in an odd number (3). Looks like a Yurok design from page 123-125 that Kroeber says is called vEtergerpuraa, which has some significance because of the spatial geometry.

Structure: Quite sure this is a hat, partially because of the use of porcupine quill, which would not be on bowls at all, but itâs not Hupa, Yurok, or Karuk and I believe itâs from a more inland community. It has a lot in common with the other hats like 1969.87 or 1945.145, could be all from a similar or same community. There is a hair stuck on the outside in the middle of the body. Itâs a much more flexible weave, likely because of the different warp being something like tule.

Cultural affiliation notes: This does not look Hupa, Yurok, Karuk, though there are similar design and material conventions. The start/center/button is too different, itâs quite a bit deeper than expected for their hats. The black overlay material is also different, and the edge finishing is different. The weave is rougher too, not as fine. I think itâs likely from a nearby but more inland community like Klamath/Modoc, Astarawi, etc.