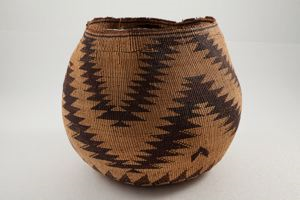 Design: This design looks like the pattern on page 122 of Kroeber, which he says is either considered a waxâpoo or a flint repetition

Structure: This is a larger storage basket. I notice it is like the shape of a classic tobacco storage basket (teardrop), but bigger. It seems like it would have been used in a home, it is definitely big enough unlike the trinket baskets or fancy baskets. It has many hairs all over inside and out. Has definitely suffered some damage maybe from use or just handling over time, particularly to the rim. Larger warp sticks were used for this basket than ones used for hats for example, so itâs a bit of a wider weave but it is very strong â probably hazel as those were used for stronger support. Not a ton of indicators of heavy residue use on the inside other than the wear and tear it has seen. The base has a big support stick woven in to keep the base flat and strong. Some examples of what it would have been used for: dry goods, clothing, regalia, plants and weaving materials.

Cultural affiliation notes: The record states âKarokâ and I think it would be accurate to assume itâs Karuk. Very much matches the style of this region but Iâd be curious how the donor came to know it was Karuk instead of Yurok or Hupa, perhaps they knew a little more about where they acquired it. Another big storage basket in the MCAM collection that is similar and from the same accession is 1948.6. Storage baskets in the Karuk alphabet were called C+Â´P-NOK-MÃ-YON-NUR or sipnuk.