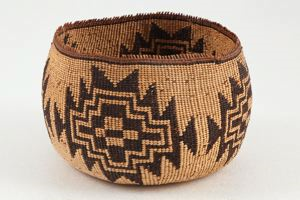 Design: I couldnât really figure this design out from Kroeberâs pattern mapping; it looks like a combination of many design elements.

Structure: I would probably put this in the category of a fine trinket basket, something made for decoration and/or sale. Itâs definitely not a hat, likely not a bowl because of the complex overlay and design, so itâs more likely what people called a âfancyâ basket or a âtrinketâ basket. This shape sort of cones inward and pokes up into the middle at the button, like many other ones. There is some very dusty residue on the inside. There is also a hair stuck on the inside, in 2 places actually - itâs definitely not a hat but it could be the weaverâs hair even. The edge is just clipped like the Hupa, Yurok, and Karuk style baskets, itâs very intentional and even.

Cultural affiliation notes: The record states âKarokâ and I think it would be accurate to assume itâs Karuk. Very much matches the style of this region (for example in the button/start) but Iâd be curious how the donor came to know it was Karuk instead of Yurok or Hupa, perhaps they knew a little more about where they acquired it. It reminds me so much of a Yana basket the University of Colorado Museum of Natural History, with the cross-style design pattern. This one also looks similar in many ways to 1932.17.