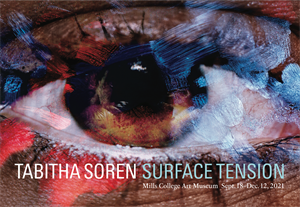 Featuring photographs by Bay Area artist Tabitha Soren, Surface Tension explores the intersection of everyday technology with culture, politics, and human contact. Using an 8x10 large-format camera, Soren shoots iPad screens under raking light to reveal the tactile trail we leave behind. The images beneath are a compendium of private and public experiences, from a young child blowing a kiss goodnight to her mother, to the protests that followed the fatal 2014 shooting by police of Michael Brown in Ferguson, Missouri. The images she chooses are drawn from web searches, text messages, social media content, and personal pictures, raising questions about authenticity and exploring the difficulty and lack of desire to distinguish between reality and fiction. Sorenâs images serve as a poignant meditation on the role of digital devices in society and offer a reminder of the traces, both physical and digital, that we leave behind when using them.

The images in the exhibition all relate to the sense of touch, whether compassionate touchâthe everyday, incidental gestures that we take for granted; a lack of touchâas seen in our societyâs collective internet habits and pandemic Zoom culture; or harmful touchâincluding ways human touch has negatively impacted the Earth or how police violence has devastated communities in America.

Surface Tension is Sorenâs first solo museum exhibition in the Bay Area and includes three new installations created specifically for the Mills College Art Museum. The first, a mural-sized image of an eye, greets the visitor as they enter the gallery. Soren has also created an immersive installation of images of resistance, from the 2016 protests in Charlotte, NC and the first national Womenâs March, to the Black Lives Matter protests of 2020 and the siege on the U.S. Capitol in 2021. Together, the images mirror the ways contemporary society consumes and disseminates information, and the way technology is used to accentuate difference as well as its unifying potential. Finally, Narcissus, a multi-channel video and sound installation featuring floor-based prints with mirrored surfaces, serves as a space for reflection and as a respite from the visual commotion of internet consumption.


THE ARTIST
Tabitha Soren (b.1967, San Antonio, TX) is a Bay Area-based artist and Peabody Award-winning journalist, known for her work as an MTV news correspondent and on-air producer. In 1999, Soren began a fellowship at Stanford University where she shifted her visual arts practice from film to still photography. Her photographs are in many private and public collections, including the Los Angeles County Museum of Art, the New Orleans Museum of Art, the George Eastman Museum of Photography, the Berkeley Art Museum and Pacific Film Archive, the Cleveland Museum of Art, the Oakland Museum of California, and San Franciscoâs Pier 24.