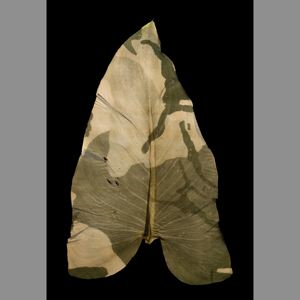 Binh Danh collects photographs and other remnants of the American-Vietnam War and reprocesses and represents them in ways that bring new light to a complicated, multivalent history. Danh is known for his unique chlorophyll printing process in which he takes found portraits of war casualties and anonymous soldiers and transfers them onto leaves and grasses through the process of photosynthesis. While Danh left Vietnam with his family at a young age, return trips to the country have profoundly influenced the development of his work. Danhâs recent work uses a combination of found images from the American-Vietnam War and photographs taken by the artist on recent visits to Cambodia, Laos, and Vietnam. âHistory is not something in the past. It is something living and of the present that is constantly changing,â said Danh. By confronting the aftermath of war, Danh creates an opportunity to examine history through enduring memories, including residual documents of war, such as photographs. In addition to large-scale photographs, Binh Danh: Collecting Memories features a series of daguerreotypes, depicting images of the My Lai Massacre Memorial at Son My Village, Funeral Chapel of Wat Xieng Thoung in Luang Prabang, Laos, and War Remnants Museum in Ho Chi Minh City. The daguerreotype is a photographic process dating to the 19th century, illustrating Danh's paralleled interest in historical forms of photography. The exhibition will also include interactive daguerreotype books, which juxtapose popular images from the Vietnam War era with those of today.

Danh received an MFA in Studio Art from Stanford University in 2004 and a BA in Photography from San Jose State University in 2002. Danh's work has been on view in select solo exhibitions, including In the Eclipse of Angkor, Jordan Schnitzer Museum, University of Oregon, Eugene, Oregon (2009); Life, Times, and Matters of the Swamp, Clara Hatton Gallery, Colorado State University, Fort Collins, Colorado (2008); and One Week's Dead, Light Work, Syracuse, New York (2007). He has been included in select group exhibitions, such as Agent Orange: Landscape, Body, Image, University of California, Riverside (2009); Shifted Focus: 10th Anniversary APAture Retrospective Exhibition, Kearny Street Workshop, San Francisco, California (2008); and One Way or Another: Asian American Art Now, Berkeley Art Museum and Pacific Film Archive, Berkeley, California (2007). Danh has been awarded the Eureka Fellowship and residencies at Hollins University, Washington and Lee University, and Kala Art Institute. He currently lives and works in San Jose, California, and is represented by Haines Gallery, San Francisco.

Binh Danh in conversation with Boreth Ly
Wednesday, November 3
7:00 pm, Art Museum
Join us in the gallery for an informal conversation between artist Binh Danh and Boreth Ly, respected author and assistant professor of Southeast Asian art and visual culture at University of California, Santa Cruz, as they discuss the relationship and connection between memory and trauma as it relates to Danhâs current work in the exhibition Binh Danh: Collecting Memories and Lyâs art historical research.

Reading with Isabelle Thuy Pelaud, Troung Tran, and Angie Chau
Wednesday, December 1
7:00 pm, Art Museum
Join us for an evening of poetry and literature presented in conjunction with the exhibition Binh Danh: Collecting Memories. Noted authors Isabelle Thuy Pelaud, Truong Tran, and Angie Chau will read from new literary works as part of a thought-provoking interdisciplinary dialogue that explores the intersections of art, activism, and identity.