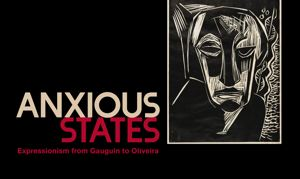 Featuring works from the Mills College Art Museumâs collection, Anxious States follows the evolution of Expressionism as an artistic response to features of modernityâsocial anxiety, disruptive technologies, intractable warsâacross a range of time periods and cultures. Expressionism describes an aesthetic style that developed from feelings of uncertainty, dread, and alienation that accompanied the industrialization of the 20th century. The works included in this exhibition can be read as political as well as emotional reactions to a rapidly changing world.

The artists featured in Anxious States challenge the norms of what is visually appealing. Anxious States includes examples of woodblock prints, lithographs, drawing, etchings and engravings by some of the progenitors of German Expressionism including founding members of Neue Sachlichkeit (New Objectivists), Die BrÃ¼cke (The Bridge) and Der Blaue Reiter (The Blue Rider), as well as successors within the Symbolist and Bay Area Figurative movements. Linked by their stylistic qualitiesâangular and agitated lines, high contrast colors, primitivist appropriationâthe featured artists produce visually jarring images that evoke a sense of inner chaos, trauma, and angst.

Before and during World War II, Mills College played an important role in the promotion and preservation of German Expressionism and Bauhaus artworks. Beginning in 1935, MCAMâs director and distinguished art historian Alfred Neumeyer used his extensive network to introduce important and sometimes controversial European artists to Bay Area audiences. Many of them, including Max Beckmann, were condemned as "degenerate artists" by the Nazis. Some managed to flee the threat of fascism on guest visas through Mills' Summer Sessions program which invited international artists to teach on campus. Though some of the works in the exhibition are over a century old, the ideas and forms expressed in them are relevant to our time of colossal technological change and global political upheaval. Anxious States reprises the 20th centuryâs sense of state disenfranchisement to frame the psychological states of today.

On this occasion, MCAM is also pleased to launch our latest archive exhibition space which will display supplementary historical records and documentation, including original correspondence letters, posters, and acquisition papers, related to the artworks and artists featured in Anxious States.

Seiltanzer (The Rope Dancer) from Kunst der Gegenwart (Art of the Present) 1940.98

Self Portrait with Cigarette 1941.2

Your current search criteria is: Exhibition is "Anxious States: Expressionism from Gauguin to Oliveira".