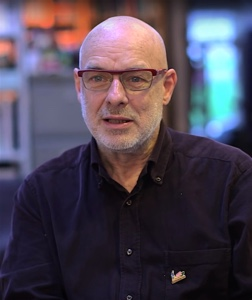 British, b. 1948
Brian Eno (born May 15, 1948 as Brian Peter George Eno in Suffolk, England) is a visual artist, musician, composer, singer, and producer most known for creating the ambient music genre. Eno has made substantial contributions to rock, pop, and electronic music, playing a significant role in the evolution of popular music in the 1980s and â90s.

In the mid-1960s, Eno studied both painting and experimental music at Ipswich Civic College art school and later at the Winchester School of Art. While studying visual art, Eno experimented musically with various musicians, ultimately moving on to form a successful career as a solo musician. He later established himself as a well-known producer, working with alternative performers such as David Bowie, Devo, the Talking Heads, and U2.

Eno continues to work as a producer, musician, and visual artist, now working and living in London.

Your current search criteria is: Artist is "Brian Eno".