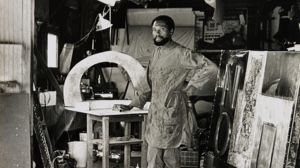 American, (1933–2020)
John Outterbridge was a pioneering California assemblagist who quarried scrapyards to fashion metaphors for the new forms needed to reshape American social consciousness as well as for the complexities of Black life. As a key figure of the California Assemblage movement in the 1960s and the director of the Watts Towers Art Center from 1975 to 1992, Outterbridge became central to a Los Angeles community of African American artists who included David Hammons, Noah Purifoy, John T. Riddle Jr., and Betye Saar.

Born in segregated North Carolina in 1933, Outterbridgeâs interest in scavenged materials began with his father, a ârag manâ who made a living by recycling metal and machine parts. âI had a mother and a father who had a lot of faith in cast-offs, the beauty and the aesthetics of what is not of use anymore,â he told Artforum in 2011. âThat has always excited me because I saw old fences, degraded buildings, and scrub rags not as foreign objects but as being of a piece in the language of life, each with a lot of kinship between them.â

From 1969 to 1972, Outterbridge was artistic director of the Communicative Arts Academy, which he cofounded, and in 1975 became director of the Watts Towers Art Center, which shared its roots with other Black Southern California collectives in the 1960s and â70s, among them the Watts Writers Workshop, the Inner City Cultural Center, and the New Art Jazz Ensemble. Even after his departure from the Watts Towers in 1992 to focus on his artistic career, his studio practice, which he continued up until the mid-2010s, remained inseparable from his role as an activist and educator.

Your current search criteria is: Artist is "John Wilfred Outterbridge".