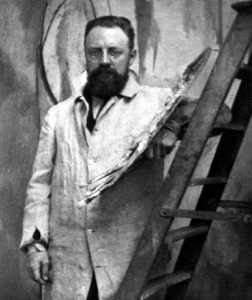 French, (1869–1954)
Henri Ãmile BenoÃ®t Matisse (December 31 1869 - November 3, 1954) was a French visual artist and leading figure of Fauvism known for his liberal use of color, flattened forms, and decorative patterns. Though primarily regarded as a painter, Matisse was also a draughtsman, printmaker, and sculptor. His typical subject matter consisted of nudes, dancers, still lifes, and interior scenes done with an experimental and often intense color paletteâperhaps his best-known example being Woman with a Hat (1911). His Fauvist works were quite radical for their time, receiving scorn from critics and journalists. Yet for his contributions to visual art, alongside Pablo Picasso, Matisse is considered to be one of the revolutionaries of modern art. Later in life, as ill health and old age prevented him from painting, Matisse turned to cut-paper collage, producing an important body of work known as The Cut Outs, including the famous piece Blue Nude II (1952). He passed away two short years later on November 3, 1954 in Nice, France.

Portrait of a Woman with Flowers (Girl with a Vase of Flowers) 1926.85

Your current search criteria is: Artist is "Henri Matisse".