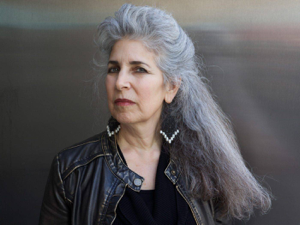 American, b. 1953
Juana Alicia (born 1953) is an American muralist, printmaker, painter, activist, and educator whose style blends realism, abstraction, and surrealism. Through her art, she attempts to convey a sense of shared humanity and appreciation for the environment. Aliciaâs murals are primarily located in the San Francisco Bay Area and throughout California, Pennsylvania, Mexico, and Nicaragua.

Though she was born in Newark, New Jersey in 1953, Alicia grew up in Detroit, Michigan near the Detroit Institute of Art. Alicia began working as an artist in her teenage years, coming to age during the civil rights movement and Vietnam War protests of the 1960s that influenced her work greatly. As an artist, Alicia believes that it is her responsibility to be an activist for social justice, the environment, and human rights, and takes pleasure in contributing to urban environments in an effort to humanize our outdoor community spaces. Alicia has worked as an educator for forty years, and is currently teaching at Berkeley City College where she founded and presently directs the True Colors Public Art Program.

Your current search criteria is: Artist is "Juana Alicia".