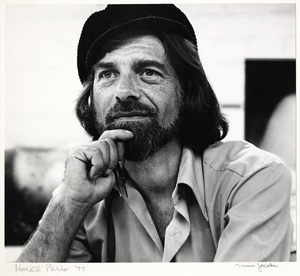 American, (1925–1979)
Harold Paris (August 16, 1925 - July 1, 1979) was an American printmaker, sculptor, and educator known for his his dark sculptural works which draw upon his traumatic experiences witnessing Nazi death camps in person during his time working as a correspondent for the American military newspaper Stars and Stripes in the midst of World War II.

Born in Long Island, New York, Paris studied printmaking at Atelier 17 in New York City, and later studied sculpture at the Akademie der Bildenden KÃ¼nste in Munich, Germany. After witnessing the horrors at the Buchenwald concentration camp, Paris settled in California where he became Assistant Professor of Art at the University of California, Berkeley, and was promoted to full professor in 1972. Paris taught printmaking and sculpture, and co-founded the universityâs bronze foundry where he developed unique techniques of welding and casting previously thought to be impossible. Throughout his artistic career, Parisâs works were deeply informed by the trauma he experienced during the Second World War, his personal torment underlying the imagery he produced. Aside from the graphic engravings of Parisâs 1945 series Buchenwald, there are Semetic references in his imagery and titled, but much of his sculptural iconography is personal, unique, and abstract in form.

Paris died in El Cerrito, California on July 1, 1979 just as recognition of his art was being realized.

Your current search criteria is: Artist is "Harold Paris".