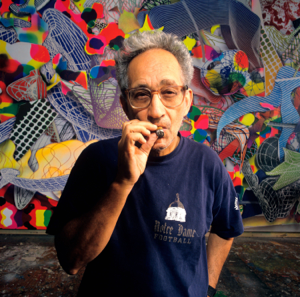 American, b. 1936
Frank Stella (born May 12, 1936) is an American painter, sculptor, and printmaker associated with the birth of Minimalism. Stella is best known for his use of geometric patterns and shapes in both his paintings and sculptures. Stellaâs works utilize the formal properties of shape, color, and composition to explore non-literary narratives, aiming to tell a story using the language of shapes. Referring to his attempt to drain any external meaning and symbolism from painting, his straightforward remark, âWhat you see is what you see,â became the unofficial philosophy of the Minimalist movement.

Born in Malden, Massachusetts, Stella studied history at Princeton University before moving to New York in 1958. Over the following years Stella would begin to gain traction in the art world, eventually becoming the youngest artist ever to be granted a solo exhibition at The Museum of Modern Art in 1970. Stella continues to live and work in New York City.

Your current search criteria is: Artist is "Frank Stella".