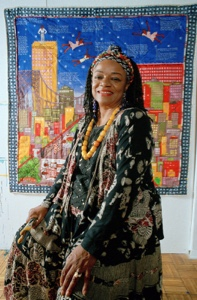 American, b. ca. 1930
Faith Ringgold was born in 1930 in Harlem, New York City. She is a multimedia artist, educator, and writer best known for her textile pieces. Ringgold received her bachelor's degree from the City College of New York in 1955. She went on to complete her MA in visual art from City College in 1959 while teaching art at public schools in New York City. Ringgoldâs creativity was nurtured from an early age with the support of her mother Willi Posey, a seamstress and fashion designer, with whom Ringgold worked closely on her first textile piece, Echoes of Harlem, 1980.

Ringgoldâs early artistic career was heavily influenced by the Civil Rights and Feminist movements of the 1960âs and 70âs. Her political activism against racial and gender discrimination is reflected in much of her artwork, most notably her narrative quilts. Incorporating hand-written text, embroidery, genre painting, and quiltmaking, Ringgoldâs textile pieces convey her departure from Western traditions of fine art and craft and instead embrace the value of family and cultural heritage. She is also the published author of several illustrated childrenâs books whose subjects include Martin Luther King Jr., Harriet Tubman, and the Harlem Renaissance.

She now spends her time between Englewood, New Jersey and La Jolla, California.

Your current search criteria is: Artist is "Faith Ringgold".