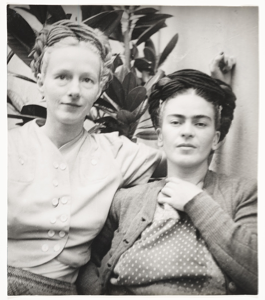 American, (1914–1998)
Emmy Lou Packard (April 15, 1914 - February 22, 1998) was an American painter, printmaker, and muralist best known for her murals at the University of California, Berkeley, and for her close relationship with Diego Rivera and Frida Kahlo.

Born in El Centro, California, Packardâs father was the founder of an agricultural cooperative community in the Imperial Valley and an internationally known agronomist. In 1927, Packard traveled with her parents to Mexico for her fatherâs consulting job with the Mexican government working on agrarian reform issues. Packard, who was thirteen at the time, had already begun painting and drawing. While in Mexico, Packardâs mother introduced her to artists Diego Rivera and Frida Kahlo, marking the beginning of a long friendship and mentorship. Packard would later travel back to Mexico to live with Rivera and Kahlo, working as their studio assistant.

Packard earned her bachelorâs degree from the University of California, Berkeley, in 1936. After graduating, she went on to study mural and fresco painting at the San Francisco Art Institute. When Diego Rivera traveled to San Francisco in 1940 for the Golden Gate International Exposition, he asked Packard to be the chief painting assistant for his mural Pan American Unity. Packard was later commissioned to design and execute murals at the Chavez Student Center at the Lower Sproul on the University of California, Berkeley campus. Packard was additionally an active community member in the mural movement of San Franciscoâs Mission District, and served as a technical adviser for the mural located at Mission Street and 23rd Street.

Your current search criteria is: Artist is "Emmy Lou Packard".