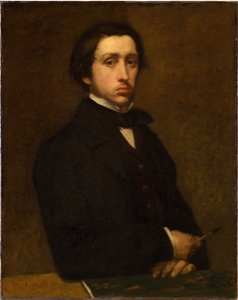 French, (1834–1917)
Edgar Degas (July 19, 1834 - September 27, 1917) was a French Impressionist painter, sculptor, and printmaker known for his depictions of Parisian life. Among his most notable works are La Classe de Danse (The Dance Class), 1873-76, and Place de la Concorde, 1875, both of which encapsulate quintessential elements of Impressionist-era Parisian life that Degas favored as subjects, such as that of courtesans, dancers, and cabaret singers, and the wandering flaneur.

Though Degas was considered to be one of the founders of Impressionism, he resented the term, preferring to be referred to as a realist. Initially aspiring to be a history painter, Degas exhibited his paintings at the Paris Salon beginning in 1865, but after attracting little attention he shifted from history paintings to contemporary subjects. He turned to figurative works done in an Impressionistic style, although Degas set himself apart from his Impressionist cohorts by exclusively depicting interior scenes.

Degas lived a secluded life, as he believed that artists should lead private lives. His eyesight had steadily deteriorated in the latter half of his life, leaving him entirely unable to paint by 1912. He died just five years later in 1917 wandering the streets of Paris.

Your current search criteria is: Artist is "Edgar Degas".