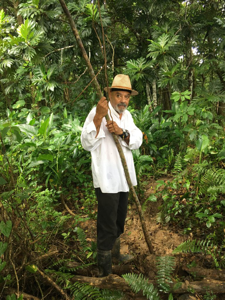 American, b. 1946
Papo Colo (born August 12, 1946) is a Puerto Rican performance artist, painter, writer, and curator who presently divides his time between New York City and the El Yunque rainforest in Puerto Rico. As an interdisciplinary artist, Coloâs work ranges from performance, theater, and installation art to writing, painting, and graphic design.

Born in Puerto Rico in 1946, Colo left the island at the age of eighteen as a merchant marine. Upon his return in 1971, Colo created a false diploma from the University of Puerto Rico as his first conceptual art piece. Though Colo did not actually attend the University of Puerto Rico, he did study in New York at Columbia University where he was instructed by the poet Nicanor Parra. Following his time as a student, Coloâs interest in pre-Columbian and Latin American cultures led him to leave New York City for Mexico where he spent a year travelling throughout the country. From 1973 to 1980, Colo lived and worked between New York City and Barcelona. During this time Colo did a series of performances involving physical endurance with heavy political undertones. Of his performance pieces, Colo is perhaps best known for Superman 51, in which Colo ran the West Side Highway with a total of 51 blocks tied to his back until exhaustion. Colo is additionally known for Exit Art, an internationally known cultural center in New York City founded by Jeanette Ingberman and Papo Colo himself.

Your current search criteria is: Artist is "Papo Colo".