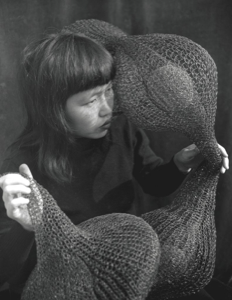 American, (1926–2013)
Ruth Aiko Asawa (January 24, 1926 - August 5, 2013) was an American artist known for her hanging sculptures based on sinuous organic forms. Working mainly with galvanized wire, stone, and bronze, Asawa crafted woven nest-like works inspired by Mexican basket-weaving techniques. In addition to her wire sculptures, Asawa is known for her many public commissions throughout the San Francisco Bay Area, which most notably include the fountains at both Ghirardelli Square and the Grand Hyatt Hotel San Francisco.

Born in rural Norwalk, California to Japanese immigrant parents, Asawaâs childhood was darkened by her familyâs detainment in a Japanese-American internment camp during the second World War. In 1946, Asawa left California to study at Black Mountain College in North Carolina. During her time there, Asawa studied under artist and professor Josef Albers. His use of repetition and slight alteration to achieve different resounding effects would strongly influence the intricately repetitious woven forms of her sculptures.

Upon moving to San Francisco in 1949, Asawa dedicated much of her time to advocating for accessible art education, ultimately co-founding the Alvarado Arts Workshop in 1968. Additionally, Asawa was instrumental in establishing the first San Francisco public arts high school in 1982, which was later renamed the Ruth Asawa San Francisco School of the Arts.

Your current search criteria is: Artist is "Ruth Asawa".