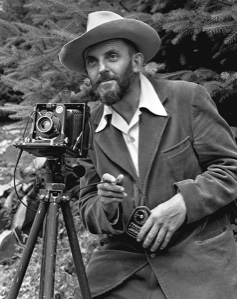 American, (1902–1984)
Ansel Easton Adams (born in San Francisco, California on February 20, 1902 - died April 22, 1984) was an American photographer known for his emphasis on landscape and environmentalism in his black-and-white photographs of the American West. Along with American photographers Imogen Cunningham and Edward Weston, Adams helped form the Group f/64: an association of artists reacting against the pictorialist photographic style and advocating instead for a new modernist aesthetic with the intent of rebranding photography as a fine art rather than simply a form of documentation. The aesthetic focus of the group emphasized the fine tuning and methodical use of the cameraâs mechanical features, such as utilizing sharp focus and full tonal range to produce precisely exposed images of natural forms.

Adams was a leader and advocate for the environmental conservation movement, a dedication that is apparent in his photography. At age twelve, his first experience using a camera coincided with his first time visiting Yosemite National Parkâa connection that would greatly inspire his photographic career in the years to come. Adams was employed by the United States Department of the Interior as a national park photographer, a job which sent him throughout the country in an effort to capture the natural grandeur of American wilderness. His photography ultimately aided in the expansion and conservation of the National Park system.

Brochure for A Photographic Study - including reproduction of photo "The Hands of the Potter" 1983.5.1

Your current search criteria is: Artist is "Ansel Adams".