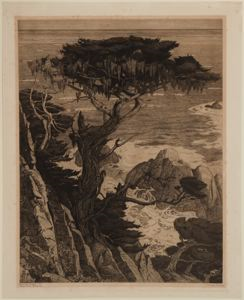 From the Heights, #7, Point Lobos, California


Object Type: Works on Paper
Creation Place: North America, United States
Medium and Support: Etching on paper
Credit Line: Gift of the Artist through Albert M. Bender
Accession Number: 1925.58
Cornelis Botke was primarily a landscape painter but was also known as a skilled etcher and block-printer. In 1919, Botke and his wife, Jesse Arms Botkeâalso an important painter and muralistâmoved to Carmel, California where they immediately became active members of the Carmel art community. Botkeâs interest in etching began in the early 1920s and he became extremely proficient in the medium, creating works that were primarily landscapes of the rural areas near his home. In this large etching, Botke captures the dramatic and exceptional beauty of Point Lobos, an ocean-front mecca of biodiversity near Carmel that is now preserved as part of the California State Park system.
Keywords Click a term to view the records with the same keyword
Click here to show Keyword Descriptions
Exhibition List
This object was included in the following exhibitions:
Dimensions

Your current search criteria is: Keyword is "W".