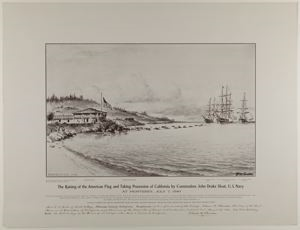 The Raising of the American Flag and Taking Possession of California by Commodore John Drake Sloat, U.S. Navy - at Monterey, July 7, 1846


Object Type: Works on Paper
Creation Place: North America, United States, California
Medium and Support: Photo-engraving on paper
Credit Line: Gift of Major Edwin A. Sherman
Accession Number: 1923.8
This historical print portrays Commodore John D Sloat and his troops arriving on the California coast during the Mexican-American War, illustrating the attitudes that encompass Manifest Destiny and the sense of entitlement that colonialists had for California. The language used in the inscription that accompanies the image reflects the glorification of colonialism that was celebrated by Americans during the Mexican-American War. The inclusion of this piece in an exhibition that highlights current environmental and social issues draws attention to specific moments in history that continue to influence individuals today.

Your current search criteria is: Keyword is "S".