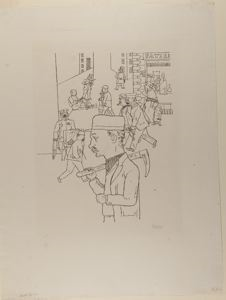 
Object Type: Works on Paper
Creation Place: Europe, Germany
Medium and Support: Etching on paper
Credit Line: Museum Purchase, Susan L. Mills Fund
Accession Number: 1957.67
George Grosz was a German artist who is known for work that is a form of social critique. He was associated with New Objectivity movement and Berlin Dada, and he created satirical pieces that harshly criticized German society, especially after the World War I. He often used pen and ink as well as etching in order to produce illustrations for magazines and journals. His unique style is considered to be a social-realist style, which accurately conveys his vision of society and its simplicity allowed any viewer to understand the context clearly. This piece captures a daily city scene in Germany after the WWI. Although each figure is defined well, they represent a general group of people from different classes and are not specific individuals. By symbolizing the whole crowd, Grosz successfully depicts critique of the government as well as portraits the ideal modern society.

Your current search criteria is: [Objects]Object Type is "Works on paper" and [Objects]Display Artist is "George Grosz".