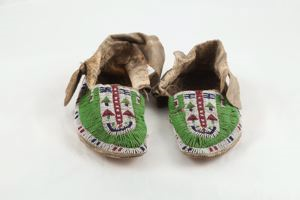 
Object Type: Sculpture and Decorative Arts
Creation Place: North America, United States
Medium and Support: Untanned animal hide with bead decoration
Credit Line: Gift of Dr. and Mrs. Suren H. Babington
Accession Number: 1973.33
The 19th century was an exceptionally cruel era of the mistreatment of Native Americans. The Indian Removal Act of 1830, passed by President Andrew Jackson, forced the Cherokee nation to give up their lands to the U.S. government and relocate. The journey and aftermath were dubbed the Trail of Tears by the Cherokee people, from the grief and suffering it entailed. The Indian Wars and the massacre at Wounded Knee in 1890, the cultural erasure of Native Americans and forced assimilation into white colonial society through boarding schoolsâthe trauma of such events has been intergenerational. In looking at these moccasinsâlight weathering around the ankles, the gradual fraying of the beadsâone wonders the history behind them. Why were they made, and for who? Why were they taken off? The unknown story of these moccasins is a reminder of so much of the rich diversity that we have lost through the violent trajectory of colonialism.

Your current search criteria is: [Objects]Object Type is "Sculpture and Decorative Arts" and [Objects]Display Artist is "Native American".