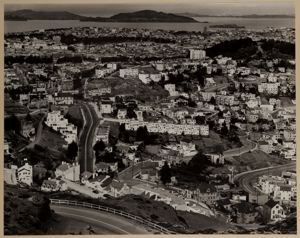 
Object Type: Photography and Video
Creation Place: North America, United States, California
Medium and Support: Gelatin silver print
Credit Line: Museum Purchase, Susan L. Mills Fund
Accession Number: 1941.3
This aerial photograph of San Francisco was taken in 1940 by Brett Weston. Weston was the son of founding member of Group f/64, Edward Weston. Although by 1940 the photography collective had gone their separate ways, this photograph conveys the ideas and new-found techniques that were pioneered by Brett Westonâs father and his colleagues. Weston developed a love for photography at an early age and had a close artistic relationship with his father. When Weston was fourteen, his father took him out of school to work as his apprentice on a trip to Mexico. .It was on this trip he found himself surrounded by artists such as Diego Rivera and Frieda Kahlo. Weston followed in Group f/64âs footsteps by photographing the Bay Area and new the innovations of the West Coast.

1940 was a time of new development in California and Weston was there to document it. As opposed to Ansel Adamâs photograph The Golden Gate, San Francisco, taken in 1932 before construction of the bridge, Weston depicts the city after the Golden Gate Bridge was finished in 1937 allowing an influx of people to the developing city. Similar to his photograph, Dune, 1934, Weston conveys patterning through line and shadow to give a sense of abstraction to the image. Abstraction was a technique he used throughout his entire career. Although the title of this work is Air View of San Francisco Toward Oakland, people who are familiar with San Francisco can see, this is actually a view looking out towards Marin and Alcatraz.

Your current search criteria is: [Objects]Object Type is "Photography and Video" and [Objects]Display Artist is "Brett Weston".