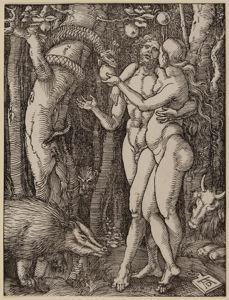 
Object Type: Works on Paper
Creation Place: Europe, Germany
Medium and Support: Woodcut print on paper
Credit Line: Gift of Dr. William Fitzhugh, Jr.
Accession Number: 1954.5.a
Albrecht DÃ¼rer lived from 1471 to 1528, and became known as a great artist of his time. This work is one of his woodcuts, but he also worked in engravings and etchings (for the printing press), and he was a master painter as well. He was a born in Northern Europe, apprenticed in Nuremberg, Germany, and traveled throughout Europe to study the works of artists that came before him. DÃ¼rer was a humanist, and was a supporter of Martin Luther and the Reformation from the Catholic Church.

The scene represented here is Adam and Eve about to take the apple from the serpent (which is Satan.) This act will led to their expulsion from the garden, and is the âoriginal sin.â Something interesting to note here, Adam and Eve are pictured together when they are taking the apple, putting the blame on both of them. Depictions of this scene at this time and before it, usually showed Adam on one side of the tree and Eve on the other, and she is the one with the apple, blaming women for the fall of man.

Your current search criteria is: Objects is "The Small Passion (Die Kleine Holzschuittpassion): The Fall".