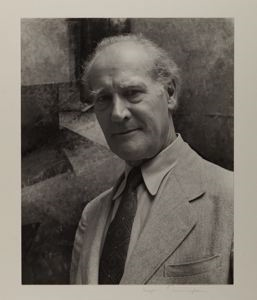 
Object Type: Photography and Video
Creation Place: North America, United States, California
Medium and Support: Gelatin silver print
Credit Line: Museum Purchase, Susan L. Mills Fund
Accession Number: 1957.70
Lyonel Feininger (1871Â­1956) was a GermanÂ­ American painter, photographer, cartoonist, and teacher born and raised in New York. In the years prior to this portrait, Feininger was a friendly rival to Edward Weston, working in the Pictorialist photographic style Weston detested, though over time he developed into a modernist artist. At the time this photograph was taken, he was teaching at Mills College. From when he was sixteen years olduntil he took the job at Mills, he had dual citizenshipbetween the States and Germany. However, around the same time that Group f/64 showed at the de Young Museum, Feininger was targeted by the Nazi party. His work was even included in Entartete Kunst, the infamous degenerate art show organized by the Nazi party in 1936. Ultimately, it became unbearable for him and his wife to stay in Germany, and he spent time in Oakland before returning to the East Coast. Mills' role as a safe haven for fleeing Germans can also be seen in another stunning Cunningham portrait of fencer Helene Mayer.

Your current search criteria is: Portfolio is "Oakland Artists" and [Objects]Object Type is "Photography and Video" and [Objects]Display Artist is "Imogen Cunningham".