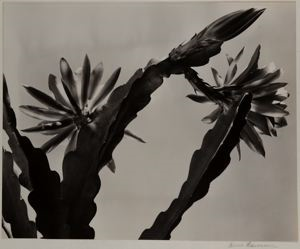 
Object Type: Photography and Video
Creation Place: North America, United States, California
Medium and Support: Gelatin silver print
Credit Line: Gift of Paul Wahrhaftig
Accession Number: 1999.21.5
Alma Ruth Lavenson was an American photographer active in the 1920s and 1930s. She worked with and was a close friend of Ansel Adams, Imogen Cunningham, and Edward Weston, having been introduced to the artists by art collector Albert Bender. In 1926 she traveled to Mexico, where she met Diego Rivera and purchased the painting now in the Mills College Art Museumâs collection. Although Lavenson participated in the famous Group f/64 show at the de Young Museum, there is some uncertainty about whether she should be called a âmemberâ of Group f/64. Lavenson was associated with Pictorialism, a photographic style that dominated during the late 19th and early 20th centuries and which Group f/64 formed in opposition to.
Dimensions
Portfolio List Click a portfolio name to view all the objects in that portfolio
This object is a member of the following portfolios:

Your current search criteria is: Portfolio is "Oakland Artists" and [Objects]Display Artist is "Alma Lavenson".