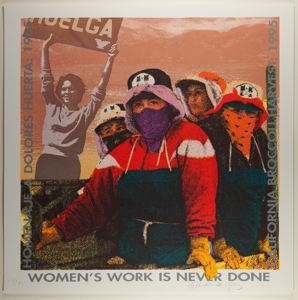 
Object Type: Works on Paper
Creation Place: North America, United States, California
Medium and Support: Silkscreen on paper
Credit Line: Museum Purchase, Mrs. John C. Sigourney [Mary Singleton], B.A. 1949, Fund
Accession Number: 1995.12.f
In this print, Yolanda LÃ³pez combines two photographs to honor the resilience of Latina women. One photograph features women labor workers from a California broccoli farm and the second photo is an image of Dolores Huerta who was the co-leader of the agricultural labor union United Farm Workers (UFW). Huerta is holding a sign that says âHuelga,â which means strike in Spanish, with the UFW logo on the bottom corner of the sign. This print comes from the portfolio 10x10: Ten Women / Ten Prints, which was published by the Berkeley Art Center in 1995 to commemorate that yearâs International Womenâs Day (March 8th) and the 75th anniversary of the adoption of the 19th amendment, which gave women in the U.S. the right to vote.

Yolanda LÃ³pez is a Mexican American artist who has deeply connected her activist work to her art practice. One of her most famous political prints was Whoâs the Illegal Alien, Pilgrim (1994). LÃ³pez is known for works focusing on the experiences of Mexican American (Chicana) women and analyzing influential female iconography. She grew up in San Diego then moved to the Bay Area where she participated in social activism, including the student strike at San Francisco State University in 1968.

Your current search criteria is: Exhibition is "Shifting Perspectives".