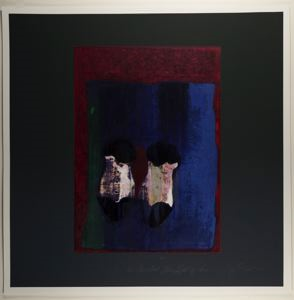 
Object Type: Works on Paper
Creation Place: North America, United States, California
Medium and Support: Silkscreen on paper
Credit Line: Museum Purchase, Mrs. John C. Sigourney [Mary Singleton], B.A. 1949, Fund
Accession Number: 1995.12.h
Mary Lovelace OâNeal is a prominent Black artist, scholar, and educator, who has been making art in California for the past fifty years. Many of OâNealâs works are influenced by her contributions to the Black Arts Movement, which originated in Harlem in the 1960s by African American artists to express Black pride and culture. Originally from Mississippi, OâNealâs artistic practice has taken her to educational institutions all over the United States: as a student in Maine, Washington D.C., New York, and as a professor at four California colleges and universities, most recently at the University of California, Berkeley. Throughout her career, OâNeal has primarily worked as a painter and printmaker. This work was included in the 10 x 10: Ten Women/Ten Prints portfolio, which was commissioned by the Berkeley Art Center to honor womenâs experiences through art for the 75th anniversary of womenâs suffrage. Dark Days in the Abundant Blue Light of Paris uses deep blue, green, and red tones, and displays abstract images that are reminiscent of spats, shoe accessories popular during the Black Renaissance in Harlem and Paris.

Your current search criteria is: Exhibition is "State of Convergence".