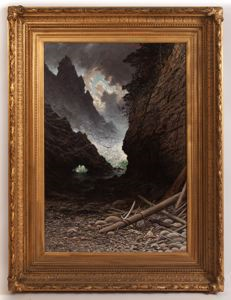 
Object Type: Paintings
Creation Place: North America, United States
Medium and Support: Oil on canvas
Credit Line: Bequest of Janet Cameron Haight, alumna 1876
Accession Number: 1932.54
Born in France, Jules Tavernier trained as an artist and exhibited his paintings at the Paris Salon in the 1860s. He arrived in New York in August 1871, initially showcasing his skills as an illustrator with scenes of daily life and American landscapes. Hired by Harperâs Weekly, Tavernier traveled across the country to make a pictorial record of what he sawâincluding the impacts of the Transcontinental Railroad, rapid expansion of white settlement, and the U.S. governmentâs forced relocation of Indigenous communities from their ancestral lands to reservations.

Tavernier was drawn to the awe-inspiring beauty of the Monterey coastline. In this painting, he adds extra drama to Point Lobos by making the sky and atmosphere ominous and threatening, and depicting a beach strewn with sea debris including whale ribs and skulls of sea birds.
Exhibition List
This object was included in the following exhibitions:
Dimensions
Bibliography List
This object has the following bibliographic references:

Your current search criteria is: Bibliography is "Jules Tavernier: Artist and Adventurer".