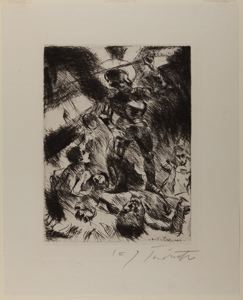 
Object Type: Works on Paper
Creation Place: Europe, Germany
Medium and Support: Etching on paper
Credit Line: Museum Purchase, Susan L. Mills Fund
Accession Number: 1940.95
Religious zeal was often characterized by the German Expressionists in their work. The Last Judgement by Lovis Corinth presents a frightening depiction of the Biblical end of time. During his art education, Corinth studied under academic realist William-Adolphe Bouguereau at the AcadÃ©mie Julian and developed an Impressionist painting style. He later rebelled against his traditional training by joining the Secession movement of artists who embraced progressive styles and developed a more Expressionist approach towards his work.

In The Last Judgment we can see a meeting of the traditional with the avant-garde. In the print, Corinth employs thick and chaotic line work and the dramatic staging of figures found in traditional Northern European etchings, such as those by Peter Paul Rubens, who Corinth greatly admired. His treatment of the Last Judgement is apocalyptic and almost industrial; the armored archangel Michael smites the wicked with a large sword and rays of light emanate blindingly from his halo against the smoky background. This imagery calls to mind a battlefield, scenes of which would had been familiar to Corinth from World War I.