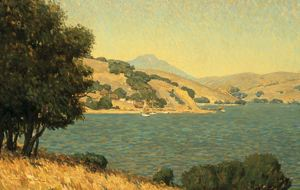 Today Redmond is best known for his colorful Impressionist oil paintings depicting the California landscape ablaze with poppies and other native flora. Silent film star Charlie Chaplin, Redmondâs friend and supporter, said of these paintings, âThereâs such a wonderful joyousness about them all. Look at the gladness in that sky, the riot of color in those flowers. Sometimes I think that the silence in which he lives has developed in him some sense, some great capacity for happiness in which we others are lacking.â Today, Redmond is widely considered one of Californiaâs top early artists.
Exhibition List
This object was included in the following exhibitions:
Dimensions

Your current search criteria is: Related to "Granville Redmond".