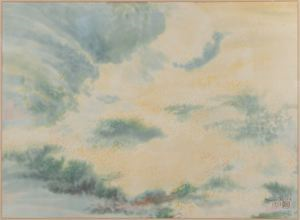 
Object Type: Works on Paper
Creation Place: North America, United States, California
Medium and Support: Watercolor on paper
Credit Line: Gift of Alice F. Deutsch
Accession Number: 1974.253
Chiura Obata was one of the most significant Japanese American artists working on the West Coast in the last century. Born in Okayama, Japan, Obata emigrated to the United States in 1903 and embarked on a seven-decade career that saw the enactment of anti-immigration laws and the mass incarceration of Japanese Americans during World War II. Obata emerged as a leading figure in the Northern California artistic communities, serving not only as an influential art professor at UC Berkeley for nearly twenty years, but also as a founding director of art schools in the incarceration camps.

Obata is best known for majestic views of the American West, sketches based on hiking trips throughout Northern California to capture what he called âGreat Nature.â His work is grounded in close observation, rendered with calligraphic brushstrokes and washes of color. He saw Californiaâs landscape as a site for the exploration of identity, spirituality, and bodily sensation.
Dimensions

Your current search criteria is: Objects is "Water [Yellow and Blue Wash]".